With 2K in the lab currently working on NBA 2K23, there’s still time to influence the direction of the gameplay. So here are our gameplay ideas and suggestions for how to take NBA 2K23 gameplay to the next level. Many of these apply to MyCAREER, City / Park, The Rec, and Pro-Am, with a focus on creating a more realistic / ‘sim’ and balanced basketball gameplay experience. We may be a good while away from a full-fledged NBA 2K simulation videogame in VR and in the Metaverse, but this could be something on the horizon that would be a complete game changer. VR would bring the action on the court to another level of immersion. Shooting, dribbling, running and more actions on the court could be physically simulated for a full-body workout, or some hybrid of that could be developed so that users wouldn’t tire out. This would be about as close to playing hoops IRL as someone could get without actually being on a real court.

Additionally, an ecosystem could be created with NFT’s (Non-Fungible Tokens), derived from player’s playing the game for digital assets, which could then be sold and traded within a Metaverse marketplace that benefits users.

First person shooters (FPS) have been in First Person camera angle since forever, and a classic 2K game – NFL 2K5 – was the first sports game to introduce First Person Mode / camera angle into sports games. Adding this camera angle to the NBA 2K series, which would probably need a lot of tweaks for stabilization and field of vision, could infuse a fresh perspective of the action on the court.

3. Stress Test the Game for Exploits Every year there seems to be new game exploits that players find after launch, whether in the overall gameplay itself, or glitchy OP MyPLAYER builds and moves which affect the gameplay balance. With those things in mind, it’s safe to say a game can never be stress tested enough prior to release day. Hiring more quality assurance (QA) game testers with the specific task of trying to find exploits in gameplay and the MyPLAYER Builder, along with releasing an early beta build of the game to the 2K Community, are concrete steps to improving the game out of the box. Especially for Esports modes like 5v5 Pro-Am or Head-to-Head, where wagering for real money occurs, more emphasis should be placed on the game having a real skill gap and to stop ‘dumbing down’ the game to appease casual players. Here are some ways on how to improve that:

For “Comp” Pro-Am, everything should really be based on skill and be a “hardcore” mode:

Reward IQ Over Archetype and Badges

Having a good MyPLAYER build, dribble moves, and badges are important, but 2K needs to get back to just playing basketball. Too often these components over-shadow BBALL IQ and it becomes a contest of who has the best OP build or spammiest dribble set, rather than who has the best basketball strategy. 2K needs to start rewarding high IQ basketball gameplay more instead of the over-reliance on who has the cheesiest setup.

Spectator mode could work for any game mode, but may especially be interesting for Pro-Am 5v5 and the NBA 2K League to create a more dynamic, immersive, and integrated platform with the 2K Community. Here’s how it could work: NBA 2K already has various Badges that players can earn to customize their MyPLAYER how they see fit. But what about Badges and/or “Traits” that dynamically characterize – good or bad – how users themselves play online?

For example, there could be a “Ball Hog” Badge, “Iso Gawd” Badge, “Dish the Rock” Badge, etc. that would be based on how someone plays. Traits would be determined dynamically by a user’s play style, factoring in elements like user tendencies, advanced stats and metrics, intangibles, how often someone quits, etc. This would give players online more of a unique identity of their playstyle, and let other players know at a glance how someone plays. These badges could be displayed above each player’s avatar or on their 2K Player Card, and it would also differentiate between builds – since an archetype could make a big difference on how someone plays. NBA 2K developer, @Da_Czar has a saying — “don’t play videogames, play basketball.” Generally this applies more in certain modes like Pro-Am and Head-to Head modes (probably less in Park / Street modes, where people expect it to be more arcade). While the game should be fun, for a game that is a self-proclaimed “NBA Simulation”, the goal should be to reduce exploits so much that in order to win, basketball IQ and realistic strategies would not just be a luxury, but an actual requirement to winning ball games.

There is also a big disparity between the type of basketball that is played in the real NBA and in real life and how “comp” Pro-Am teams play in 2K. Real basketball is more free-flowing and team-orientated, yet in 2K we often see a PG with 80%+ usage rate, iso spamming behind a screen, cones stuck in the corner, and spam-ball being rewarded. This needs to change if 2K and the NBA 2K League want to represent the sport of basketball better – which would actually make it more entertaining. If all we saw in the real NBA was a PG iso-ing nearly the entire time, how much would that make fans want to watch something else? This style of play has become repetitive and boring, yet because the play style is rewarded by 2K, it’s been the existing “meta” for years. Time to shake things up and get back to basketball.

At the end of the day, the NBA 2K Developers control the environment for what works and what doesn’t, 2K controls what type of gameplay is rewarded and what is punished. Online gameplay and online players will always do whatever works or whatever the meta is, so it’s ultimately up to 2K to try to create a realistic basketball environment.

Here are a few ways to help with that: Responsiveness and crisp movement is always something to strive for in any iteration of the game. 1 on 1 defensive movement, sliding, and foot planting can all be improved, especially to keep up with speed boosting. Input lag / delay is another area that can use improvement, as well as less ‘canimations’. With the shortage of Xbox Series X | S and Playstation 5 consoles, which resulted in less of a user base, we do understand why AI bots were put in Next-Gen Rec, likely over concerns over wait times.  More players would probably be happy to wait a little longer for a 4th and 5th real person, than to get stuck with another AI teammate. Another way to combat wait times is to make NBA 2K23 cross-platform. Rep boosting has been a problem in NBA 2K ever since the grind to improve MyPLAYERS was introduced. There should be more visible deterrents, such as in-game warnings / notifications, visible consequences (banning), and potentially a detection system where players are booted if they stop playing defense for a pro-longed period of time.

What’d we miss? Be sure to add your ideas for NBA 2K23 to our NBA 2K Wishlist! How to Fix ‘The Rec’ Experience for NBA 2K23: Matchmaking, Randoms, & More

@peepso_user_39281(Playnow_Online30)
The article was great but something is missing which is Playnow Online. Feel free to visit my twitter "@PlayNowOnline35". I have pinned my final update of suggestions to improve Playnow Online for the next upcoming NBA 2K23. Need your help to like/retweet it so that it can reach to the 2K Developers. Ty!

Here is the direct link: 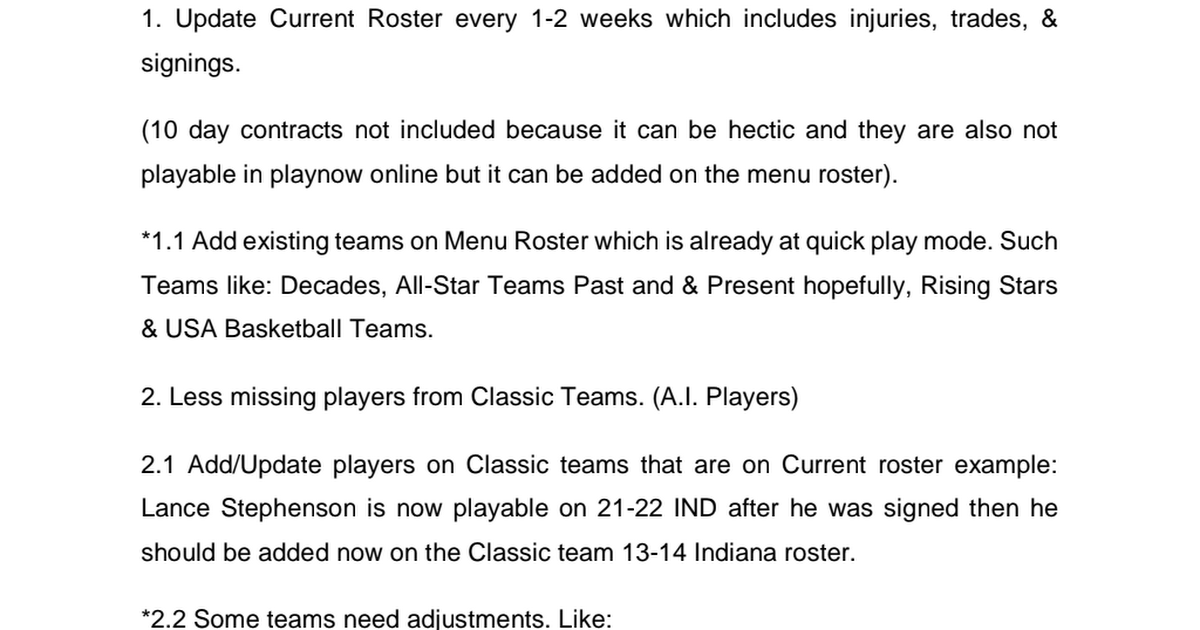